The slippery nipple is a humorously named shot that actually tastes quite good and calls for the underused drink ingredient, Sambuca Liqueur. Created in the 1980s, it has several variations that are detailed below. 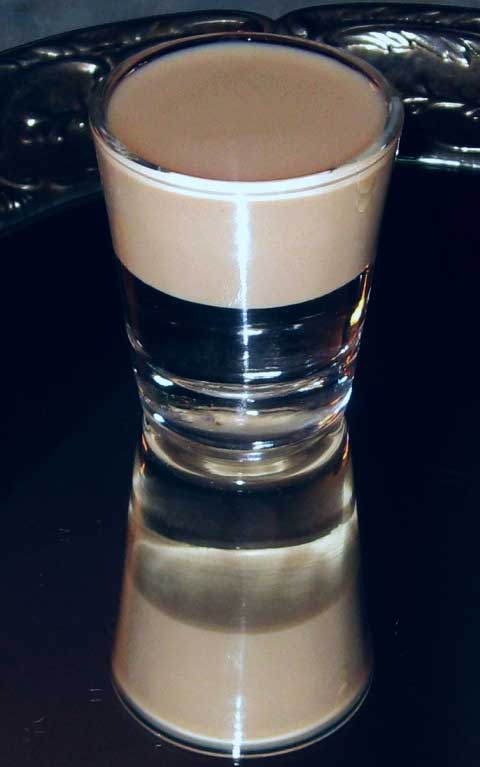 Serve your slippery nipple shot in a standard shot glass The slippery nipple shot was created by bartender Lucas Lando Klausen in the 1980s when a renewed interest in cocktails & mixed drinks came about. This was a period when many ‘shocking’ or ‘humorously’ named (depending on your perspective) cocktails hit the scene, like ‘The Sex on the Beach‘ and the ‘Screaming Orgasm’.

Why is it called a slippery nipple?

There is no evidence or proof of why this drink became known as the slippery nipple. In order to find this out we’d need to ask the bartender who created the slippery nipple drink, but we don’t have his contact information, so if you know Lucas Lando Klausen then you’re in luck.

It’s a sweet shot that calls for the underused liqueur, Sambuca which is an anise, liquorice flavoured liqueur originating from Italy. For those unfamiliar with Sambuca, it’s quite unique. The Irish cream, in this case, does a great of job of masking that unfamiliar flavor whilst still giving the drinker a nice introduction into the anise world.

That said, it’s typically not ordered for its taste, although it is a great tasting shot.

There are many variations to the original slippery nipple shot, not limited to a full blown slippery nipple recipe cocktail. Some of the most popular are detailed below but feel free to experiment with your own concoctions. For instance, try using black sambuca instead. Alternatively, replace 1/3 shot of sambuca for another liqueur like peppermint schnapps.

This variation calls for the addition 1 drop of grenadine in the centre of the shot after the sambuca and Irish cream have been poured. This creates a cool effect similar to what’s seen in a brain hemorrhage/damage shot.

The drop of grenadine should also form a ‘nipple’ at the bottom of the glass that can be ‘licked’ once the shot has been consumed.

This recipe calls for an additional layer of vodka on top. Use 1/2 shot of Sambuca, 1/4 shot of Irish cream and 1/4 shot of vodka. Layer in that order.

The difference between a Slippery Nipple drink and a buttery nipple is that you use butterscotch schnapps instead of Sambuca in a buttery nipple, hence the word “buttery” in the name.

Use Grappa instead of Sambuca.